Share to FacebookShare to TwitterShare to LinkedInShare to PinterestShare to EmailPrint this page
Alumna Spotlight: Monica Maldonado Works at White House to Advance Hispanic Education
Apr 30 2019

"There are also a lot of amazing teachers at Dalton High. Even though Jeffrey and I are both academically talented, we can’t ignore the fact that we didn’t get here on our own." 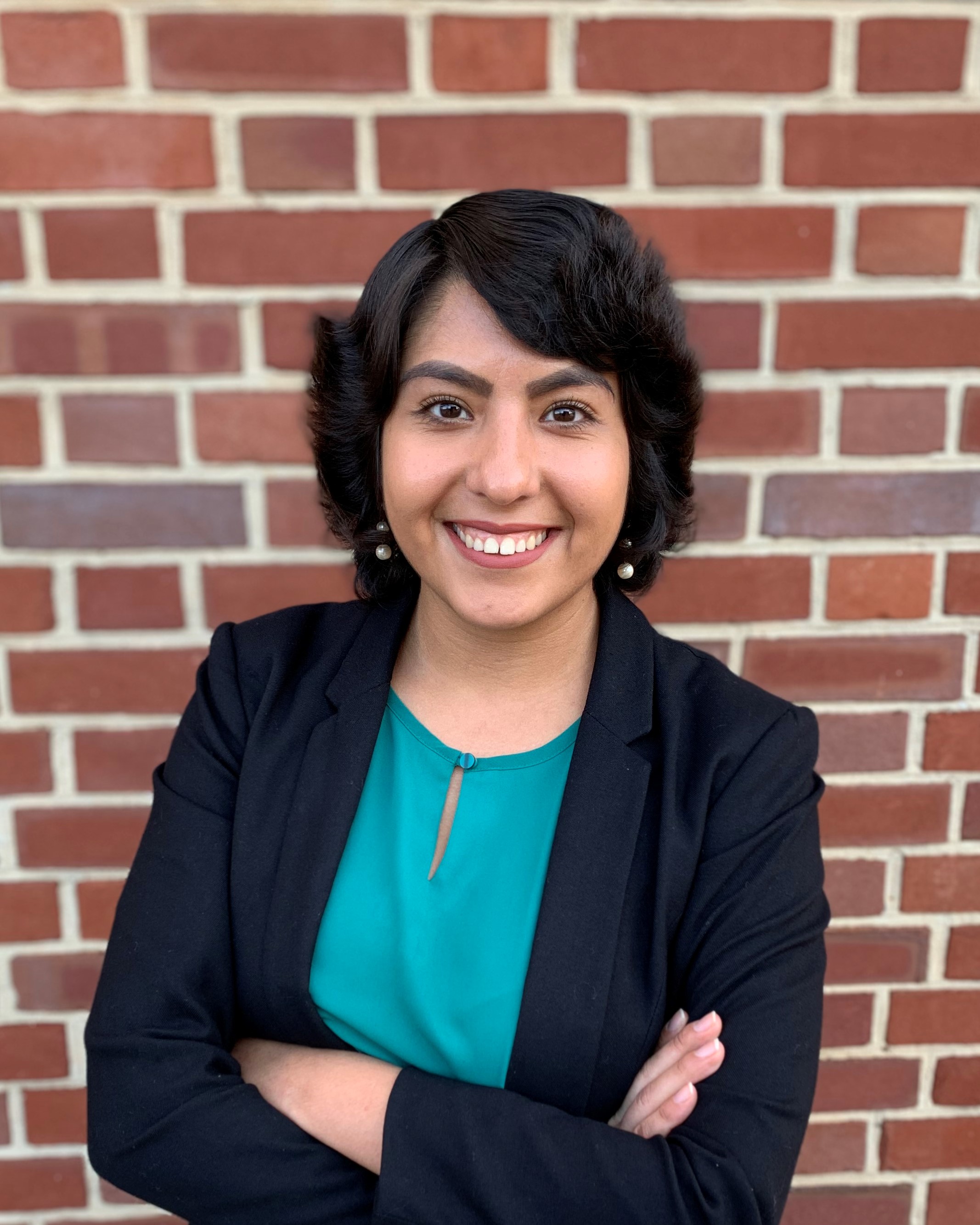 At Dalton Public Schools, we know all of our students are capable of amazing things. But, when one of our alumnae lands an internship at the U.S. Department of Education, we have to brag. Monica Maldonado, Dalton High School Class of 2012, is now pursuing her dreams to improve college access for Hispanics, working with the ED's White House Initiative on Educational Excellence of Hispanics.

When Maldonado was in high school, she was fortunate to be named a Gates Millennium Scholar, which was created through funding in collaboration with the Bill and Melinda Gates foundation to support minority students who showed promise in leadership, community service and academics. This scholarship has provided the ability for Maldonado to chase her dreams beyond what she ever thought was possible.

"At that point, I knew I was set because I could advance my education without being a burden to my family," said Maldonado. "It has been transformational; it has made the difference in allowing [me and my husband] to stay [in school]."

Maldonado has since taken every opportunity that has come her way. She received her bachelor's degree in psychology from Berry College in 2016. Starting with a goal to become a high school guidance counselor, she has always wanted to help students from minority backgrounds succeed in life and go to college. She has the same goal today, but it looks a little different.

After completing a practicum at an elementary school, she quickly realized she wanted to support students through a non-counseling role. She conducted a research study at Berry to better understand the factors that influence or affect whether Latinos go to college. As a result of that research study, she was able to present a poster at the National Conference on Race and Ethnicity in American Higher Education.

"It was at that conference that, for the first time, I was in a room with people that looked like me and my parents but also had PhDs," said Maldonado. "That was really inspiring and helped me see myself in the future. It made me realize that it was something that I could also do."

That was the point in which Maldonado discovered the field of higher education. After graduating from Berry, she married Jeffrey Ramos, fellow Millennium Scholar and Dalton High School sweetheart. They moved to Washington D.C. where Ramos was starting his master's program in higher education at George Washington University.

Before starting her master's in higher education at the University of Maryland, Maldonado worked as a student recruitment specialist with the Latin American Youth Center Career Academy Public Charter School in Washington D.C., which offers free GED prep, college credits, medical assistant training and IT certifications to residents ages 16-24. She recruited students who would benefit from the secondary and post-secondary training that could help them lead self-sustaining lives.

A board member of that school worked for the U.S. Department of Education and served as the senior advisor for an office that piqued Maldonado's interest – the White House Initiative on Educational Excellence for Hispanics. She decided to meet with him to learn more about the initiative, knowing she would begin her master's program the following year. Sure enough, the next spring she applied for an internship to supplement what she was learning in the classroom and was offered a position at the White House office. 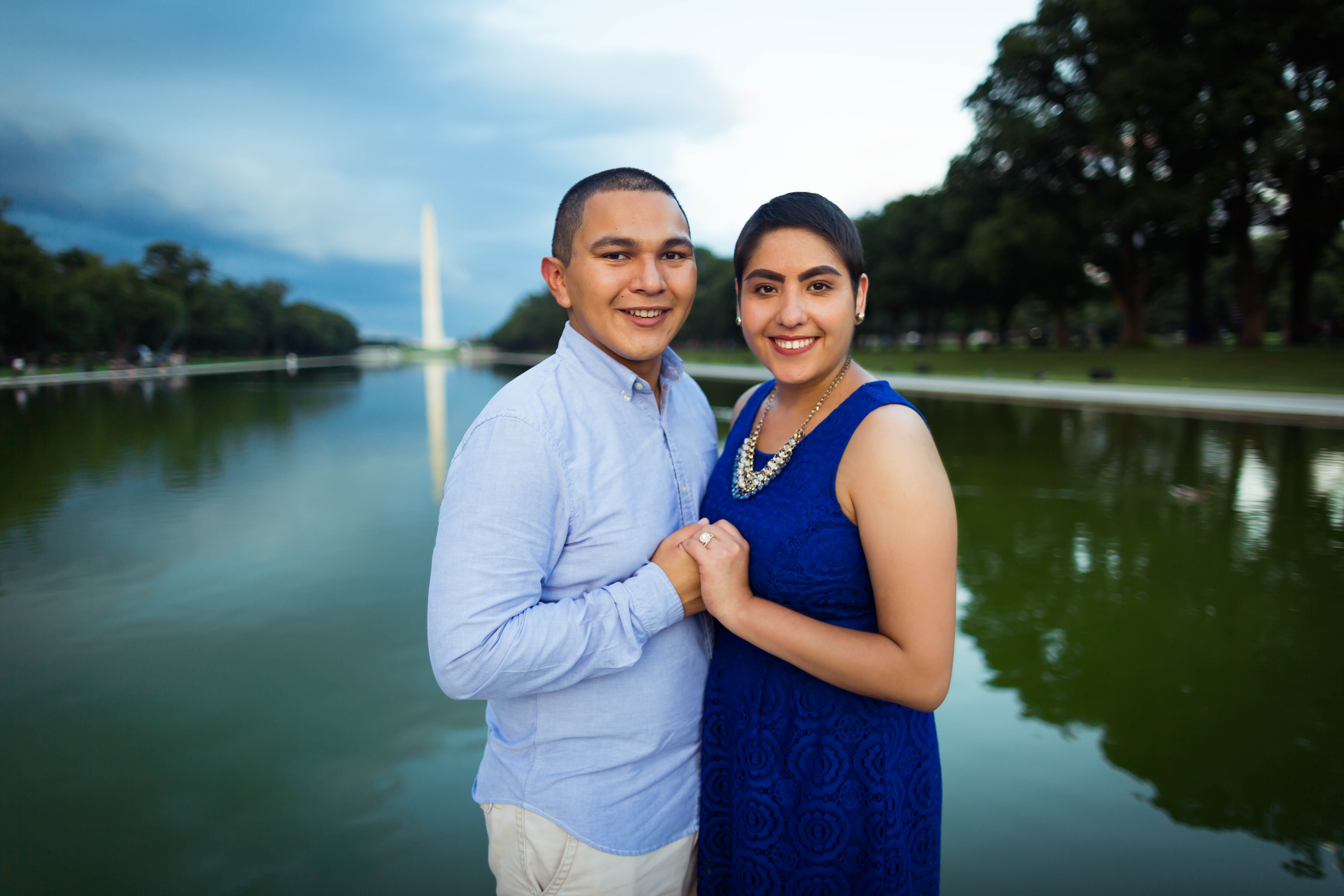 The small-staffed office focuses on advancing the educational outcomes for Hispanics and works to include Hispanics in the education conversation on a national level. A lot of major responsibility has fallen to Maldonado. The first day on the job, she attended a meeting at the White House.

She said it has been an incredible opportunity to learn how federal offices can sit together to collaborate on issues of Hispanic education.

"That meeting was full of all these different agencies like NASA and the CIA who have expressed interest in partnering with us. How can their office advance Hispanic education? Whether they are trying to diversify their workforce or do outreach at Hispanic-serving institutions, it is just a natural fit for us to work with them and help link agencies together," she explained.

Maldonado has narrowed her primary interest to issues of college access for underserved populations. She is currently collecting data about work-based learning initiatives, for example, to research how Hispanics are being served. In the coming years, the majority of jobs will require post-secondary education.

"In order to stay globally competitive in the future, we have to make sure these populations are receiving the training to fill the jobs our country needs. Whatever the issue at hand, it is our goal to inform federal offices on how to consider this specific demographic in the solution and why it matters," said Maldonado.

She recognizes that the federal government can set the tone and lead the conversation about education, but based on the Constitution, change is made at the state level. That is why Maldonado and Ramos are looking forward to returning to the South after finishing their degrees.

"As I think about bettering Dalton and other communities back home, I have to have conversations with policy leaders at the state level," explained Maldonado. "This is a good experience because I have proximity to individuals who are known nation-wide, but it's also a really good way to reset my focus to understand where I see myself making the most impactful change for my community." 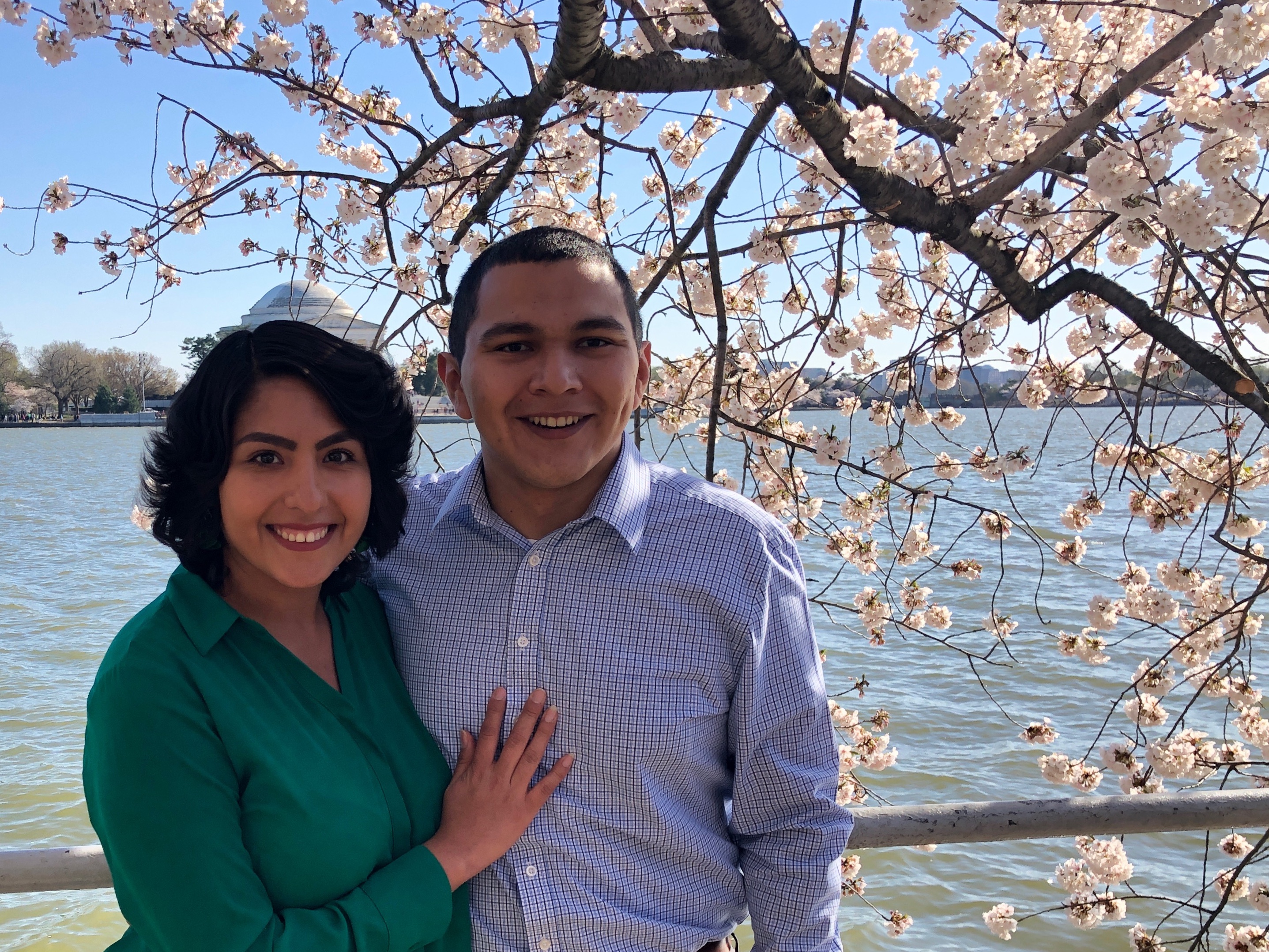 She and Ramos are looking at PhD programs across the country so that they can make connections and tap into those resources when they return home. If accepted, Maldonado would like to get her PhD in higher education or in education policy or leadership studies, depending on the program at the school she is accepted and what the Gates Millennium Scholarship can fund.

Ultimately, Maldonado is open to working for a nonprofit that improves college access to underserved students. She is also open to working in policy at the federal or state level, maybe in Atlanta, where she can influence government officials about the agendas and policies they put forward. While she is interested in education on a macro level and systematic change, her husband is passionate about working directly with students. Maldonado said this is great to offset the different points of view. Generally, they will both work on the Latino college access track.

The two share a mutual dream to start their own nonprofit in Dalton that partners to support high schools in the area and provides college advising to students. That may come later on mid-career once they have established a network, another reason she finds their time away from home so valuable.

Dalton, however, is close to Maldonado's heart because after moving around a lot as a child, it was the first place she was able to stay put, grow and make friends. It is where she calls home. Dalton is where she and Ramos eventually want to lay their roots and be close to family.

Maldonado and Ramos made the most of the opportunities offered to them, but they recognized that some of their friends did not have the same experience. "It's been great because when I talk about what made me interested in studying higher education and helping other students get to college, he [Ramos] gets it," she said. "Our goal now is just to improve what is already being done based on our experience."

While it is true that one of the reasons Maldonado is interested in the disparities in education is from her experiences growing up in a city with a large Hispanic population, she also acknowledges and appreciates the tremendous work that is being done in Dalton to provide students benefits and opportunities to succeed.

"I'm really thankful I got to go through a robust IB and AP program because I exempted a lot of credit hours when I got to college, and I was well-prepared for the rigor of my college courses," she explained. "There are also a lot of amazing teachers at Dalton High. Even though Jeffrey and I are both academically talented, we can't ignore the fact that we didn't get here on our own." 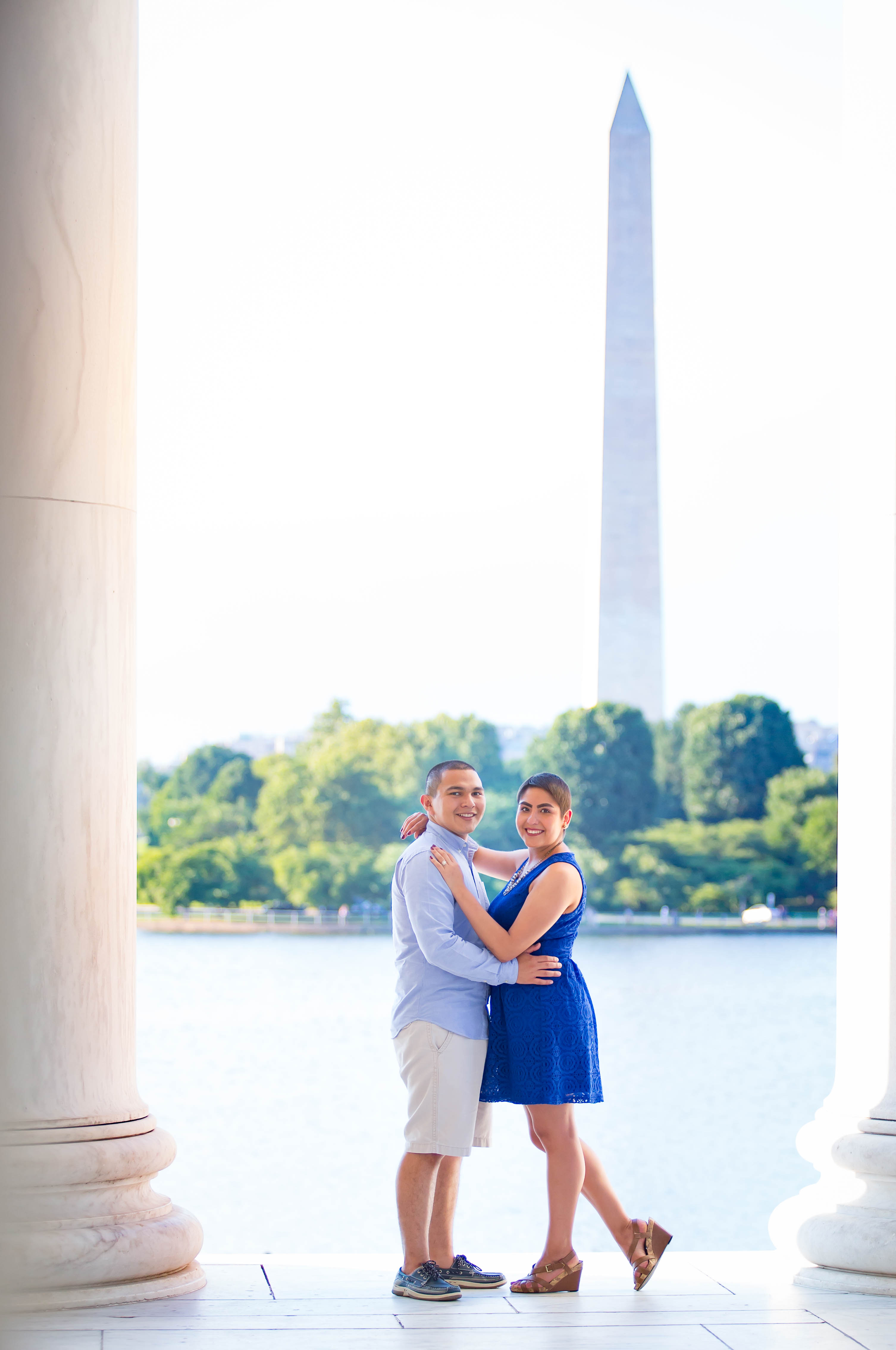 One example of a teacher that Maldonado considers a "God sent" is Ken Wiggins. When she started high school, she was quiet and shy and not confident. She said she did not think of herself as a leader or someone who could create change. Wiggins oversaw the school's mock trial team at that time and made her an attorney on the team.

"I was terrified and didn't do a great job, but over the years he really challenged and pushed me and helped me become the person I am today," she said. "The capstone of how great I did was receiving the Most Outstanding Attorney Award my senior year, which really showed me how I was able to grow over the years as a result of his support and guidance."

Wiggins wrote all of Maldonado's extensive recommendation essays to become a Gates Millennium Scholar. He also did her and her husband's pre-marital counseling and performed their wedding ceremony. (They now share a wedding anniversary with him and his wife.)

Maldonado said the Wiggins really opened their home to her and Ramos and are still an amazing support system to this day. They serve in a mentorship role but also as a family support system that their own families could not give because they did not understand the education system. Their family members appreciated that the Wiggins were there for them.

"I'm really thankful he was there for us at a time when we really needed him. He and many other teachers gave us the opportunities that got us where we are today," she said. "We just want to continue to improve."