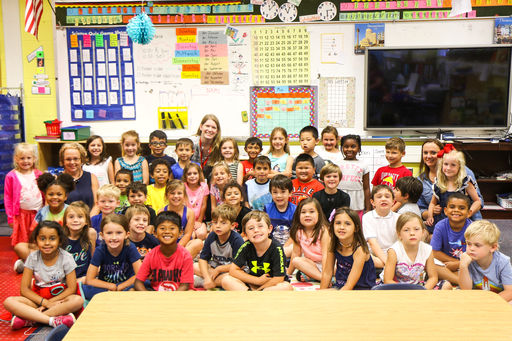 “They are so bright, and they are ready. If they stay on track, I see them being able to talk as native speakers as adults.” - Nadine Gates

The pilot year of the program allowed two kindergarten classes to each spend half of their school day learning literacy and social studies in English with teacher Jennifer Shupe and the other half learning math and science with native German speaker Nadine Gates, completely taught in German. Although the subjects taught by each teacher are not exclusive, the goal was to keep a consistent three-hour window open for German instruction to maintain the integrity of the program. A single lesson is never taught in both German and English.

"Establishing a German Immersion program for Dalton Public Schools is certainly a tall order, but one that I steadfastly believe will increase future opportunity for our students, increase interest for new, young professionals looking for a desirable public school option and add to the vast skillset of our future workforce," said Brookwood Principal Celeste Martin. "We have just ended our first year, sometimes building the ship while sailing, but nevertheless experiencing a strong year of learning and commitment to the program. I am excited to witness the growth of our current cohort rising to first grade and see the new incoming kindergarteners begin their journey."

If all goes as planned, the district will continue to hire a new German teacher each school year, as long as the program meets state standards, allowing this year's group to continue in the language at each grade level until Brookwood is a K-5 German school. Thus, each subsequent class of kindergarteners will have the chance to participate going forward. An experienced German teacher, Claire Kyzer, will continue with the initial group by teaching first grade, and the district recently hired Ms. Lydia Pearson to teach kindergarten.

Kyzer talked about her excitement to continue the work put in place by the 2016-17 team and said the fact that the students seem to genuinely enjoy the program is a testament to the solid foundation created this year. "It is easy for parents to see the long-term benefits, but it makes it much easier and less stressful when the kids are happy to be in the program, too," she said.

She understands how children's eagerness to learn is vital when implementing a program such as this from her experience guiding what is now the Waddell Academy of International Languages to its current K-8 status. She saw the program grow by a grade level each year, just like Dalton plans to do, and she is enthusiastic about helping ensure the same success is achieved at Brookwood. "Immersion is the only way to truly help a child become fluent. To have this opportunity in Dalton is very exciting," she said.

For some, German will be a third language, as many Dalton Public Schools students are already bilingual. Spanish is the primary foreign language, but members of this cohort also know languages like Chinese and Vietnamese. It is no surprise that the students have picked up on German quickly. Gates said she wants to see them continue to improve and have academic conversations in years to come. "This year was about taking it all in and getting into a rhythm. Next, they'll work on writing it more and speaking to each other," she said. "Although, they have already started doing that on their own."

"They are so bright, and they are ready. If they stay on track, I see them being able to talk as native speakers as adults."

The benefits of learning a second language at a young age are endless. For one, Kyzer says once a second language is obtained, it is that much easier to learn a third or fourth, and contrary to some concerns, one's first language is not lost whatsoever, but rather, improved. There is a larger opportunity for professional growth and success, as many employers seek bilingual candidates. Students who have gone through the program will be more marketable in whatever field they choose, especially to nearby German-based companies, like Volkswagen in Chattanooga, Tennessee. Further, being more culturally aware helps students expand their horizons and become more accepting of people unlike themselves.

Gates said some of her students' favorite parts of class were the lessons on German culture, holidays, castles, etc. "We watch the German weather channel each day, and if I forget, they're quick to remind me – 'We have to do the weather!' It's bringing it all to life," she said. "We can say, 'this is Germany; it really exists. That makes it real and meaningful to them."

The students often take what they learn home with them. Parents have reported their kids teaching German vocabulary to their siblings or singing class songs to their dolls during playtime. One parent, Bob Bethel, said he was reviewing math problems with his second grader one night, and after a pause for the answer, his kindergartener chimed in with the answer in German.

Bethel said the newness of the program to the whole region really sparked interest across the board from parents wanting the opportunity for their kids. "As I talk to people and friends that live elsewhere, they are envious," he said.

"The world continues to get smaller. I remember taking Spanish at Dalton High School, and my teacher Carol Zimbrick (now retired) telling us that the leaders of tomorrow will be bi and trilingual. Mrs. Zimbrick really embedded the desire in me to think bigger through Spanish. Having knowledge of a second language has aided me through my life by being better able to communicate with more people, both personally and professionally. It allows me to experience life in much more color by being able to meet different people and being able to travel "off the beaten path." Having experienced this fulfillment in my life and knowing how much more proficient I could be if I could have started at a younger age, how could I pass up this opportunity for my child?" - Bob Bethel

The district visited the German Immersion Program at Ashford Park Elementary in Atlanta at the beginning of the process, but that school does not have literacy collaborative and is not a STEM-certified school like Brookwood. The program was somewhat modeled after theirs, but the district had to be open to this program looking a little different and be flexible to find what worked best for Brookwood. As the program grows and evolves, it will only get easier, as long as there is community support.

Kyzer hopes to continue building on to the program and making the team stronger. "I have experience facing challenges that I both anticipate and don't anticipate. The ability to problem solve in this arena is what matters," she said.

Bethel agreed that, as in any organization, the people make the difference. "Qualified personnel are in demand and have choices where to locate for these types of programs," he explained. "Finding and recruiting them will take intentional focused effort. However, this is an opportunity for the community and DPS as a whole to attract and recruit by telling our story!"

Kyzer said she has had former students go on to visit Germany, major in German in college and use it successfully throughout their adult lives.

And if nothing else, the students enjoy having the upper hand in sibling disputes. As kindergarten student Sadie Lucas put it, "It's fun to speak German in front of my brother because he doesn't know what I'm saying!" And that in itself could be reason enough for any seven-year-old to sign up.

The Dalton Board of Education Special Meeting will take place on Monday, September 20 at 8:30 a.m. at the Dalton City Hall Council Chambers located at 300 West Waugh Street.