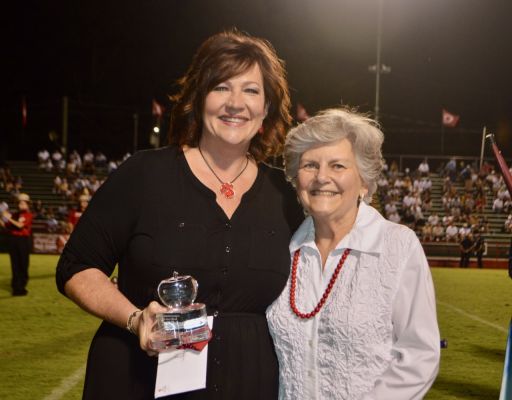 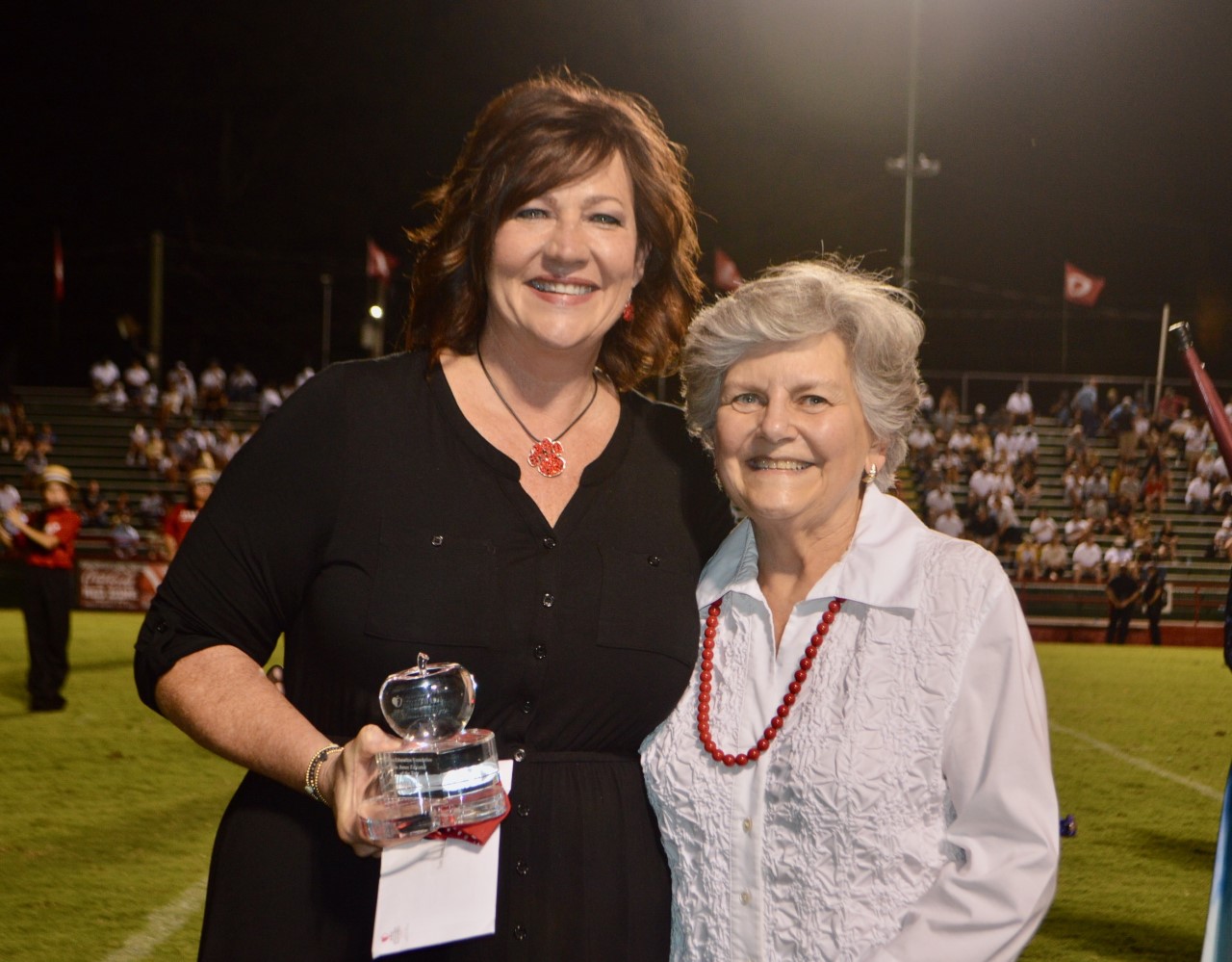 A comforting sense of normalcy swept over Dalton this week. The doors to schools across our city opened back up and football under the lights at historic Harmon Field commenced during Dalton High School's first football game of the fall season Friday night. At the conclusion of an exciting week, a special award in commemoration of a local Dalton legend was presented at halftime of the big opening game.

Parrott's jovial smile shone brightly on the field Friday as she accepted the award alongside her family, friends, and other nominees. She received a crystal apple as well as a $3,000 check. An additional $1,000 check has been given to Roan School as a part of the grant.

A deserving candidate of what is arguably the most prestigious educator award in the district, Parrott finished her illustrious career celebrated with applause and cheers resonating from those in attendance into the clear night's sky high above Harmon Field.

Although Parrott was born into a family of multi-generational educators, her first career path called her into the business world. During this eight-year time period Parrott began volunteering with the four-year-old class at her local church and discovered a newfound passion in her life, a passion to teach.

"Those four-year-olds stole my heart, motivated me to pursue a new career, and created a love for children which continues to this day," she said in her application for the award. "Indeed, those four-year-old children did what my parents and grandparents could not- they showed me the joy of teaching." 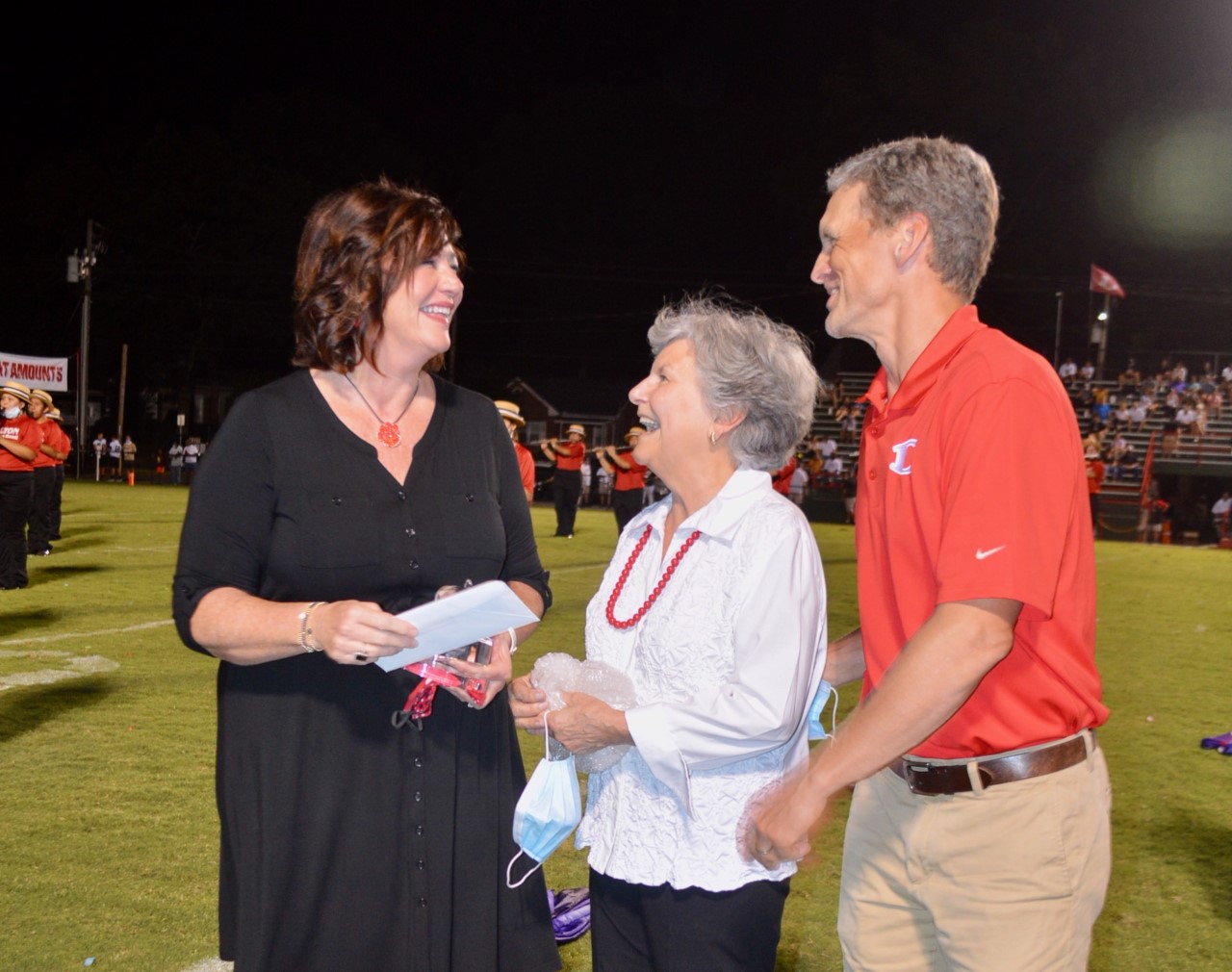 Parrott's teaching career began in 1993, the very year Dalton Public Schools implemented the first four-year-old kindergarten (Pre-K) classes. Parrott founded the basis of her early years as an educator on creating relationships with young students. On this relational foundation, Parrott was able to maintain many relationships with current and former students alike.

"Staying in touch with my former students has brought throughout their educational careers, and on into their adulthood has brought unprecedented joy into my life," Parrot said.

As Parrott's professional career progressed at Roan School into an administrative role as a principal, her focus centered on the elevating and recognizing of student voices, thoughts, and opinions on school based decision making.

Deputy Superintendent Don Amonett had high praise for Parrott as an administrator.

"An administrator has to make tough decisions sometimes, and there are times that parents, students, and/or staff do not agree with those decisions," Amonett said. "I have never met a student, parent, or staff who did not agree that Cindy Parrott always wanted what is best for her students in every decision."

One of Parrott's dearest and most memorable contributions she made as principal of Roan School was the creation of the program called "Roan Ambassadors". Each year at Roan, twelve students from the fourth and fifth grades respectively are chosen to become leaders at school and the voice of their peers through student panels. These students organize school-wide service projects, lead school tours for visitors and serve as role models for other students.

"Seeing these students grow up and continue to emerge as leaders throughout their educational careers and into adulthood has given me a great sense of pride." Parrott goes on to explain.

Parrott spent her entire 27 years as an educator within the walls of Roan School. Going from a student-teacher in a kindergarten classroom at Roan to occupying the role of principal, Parrott has impacted the lives of the students and families of Roan School on just about every level throughout her career.

"Every leader hopes to leave a legacy," Parrott said. "I hope that mine will be that of a loving, student-centered educator who always had the best interests of others at heart."

Receiving an award with Tom Jones' name in front of it is nothing short of commendable. The Tom Jones Educator Award is named in memory of Tom Jones, a prominent Dalton businessman who served on the Dalton Board of Education for 26 years and was chairman from 1967 to 1986. The award was started in 1987. Jones, who was the co-founder of J+J Flooring Group, was a native of Dalton and a product of Dalton Public Schools. Trish Bethel, daughter of Tom Jones, and her two sons, Bob and Charlie Bethel, were there to make the presentation on behalf of the Bethel family.

The other finalists for the 2020 Tom Jones Award were:

The Dalton Board of Education Special Meeting will take place on Monday, September 20 at 8:30 a.m. at the Dalton City Hall Council Chambers located at 300 West Waugh Street.