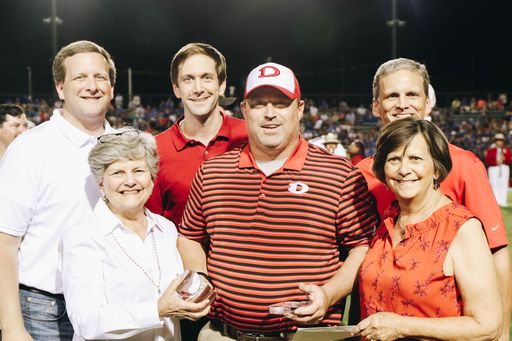 Do you know an educator in Dalton Public Schools that should be recognized for their hard work and passion for working with students, teachers and our community? Nominations are now being accepted for the Tom Jones Educator of the Year award sponsored by the Dalton Education Foundation. The award is given every year to an educator in Dalton Public Schools who has made significant contributions to the education of children in Dalton and who symbolizes excellence in teaching.

The endowed award is named in memory of Tom Jones, a prominent Dalton businessman who served on the Dalton Board of Education for 26 years and was chairman from 1967 to 1986. The award was started in 1987. Jones, who was the co-founder of J&J Industries, was a native of Dalton and a product of Dalton Public Schools. He is fondly remembered as an avid supporter for Dalton and the school district.

Last year's winner was Dr. Kit Carpenter, the Lead teacher and director with the Dalton Alternative Education Program and D3 (the Dalton Digital Difference). He has taught for 15 years, with this being his 15th year in the Dalton Public Schools.

Anyone may nominate an educator in Dalton Public Schools who has been employed by the district for a minimum of three years. Nominees will be asked to complete a Qualification Form seeking information about their relationships with students, parents and the community as well as their accomplishments. The Dalton Education Foundation selects a panel of judges from outside the Dalton district to review the nominations and select a winner. The winner, who represents "the best" in the education profession, receives a crystal apple award and a check for $3,000 from the Foundation. The winner's school also receives $1000. Nominations must be received by the Foundation by Friday, March 27, 2020 at 4:30 p.m. Nomination forms are available online.