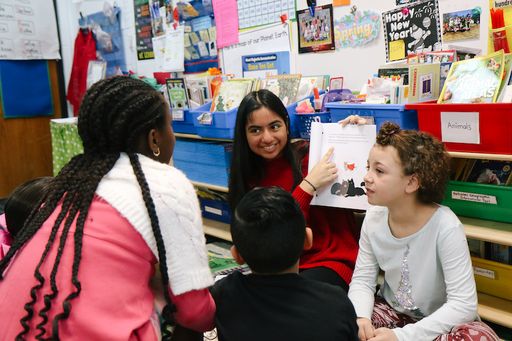 Dalton High School Spanish III and IV Advanced students took the language skills they have worked on this year and presented them to some pretty tough critics: first and third grade students at Westwood.

The assignment was to write a bilingual children's book. Students wrote their stories in English and translated them into Spanish before adding illustrations and creating the finished books online. Each group also made an activity for the elementary students to work on after their story was over.

Sophomore Mincey Jones explained that her group's bilingual story is about a caterpillar who wants to fly but does not have the ability. He takes a nap and dreams that he flies all over the world. When he wakes up, he is a butterfly.

"It's about his dreams coming true. We tried to think of an idea that the kids would know about, like the process of a caterpillar turning into a butterfly," said Jones. "We made a coloring page with a caterpillar and a word box at the bottom so they could write it and learn the words for caterpillar and butterfly in Spanish. It's really cool because all of the kids are really into it and enjoying the activity."

Check out photos from this collaboration below!