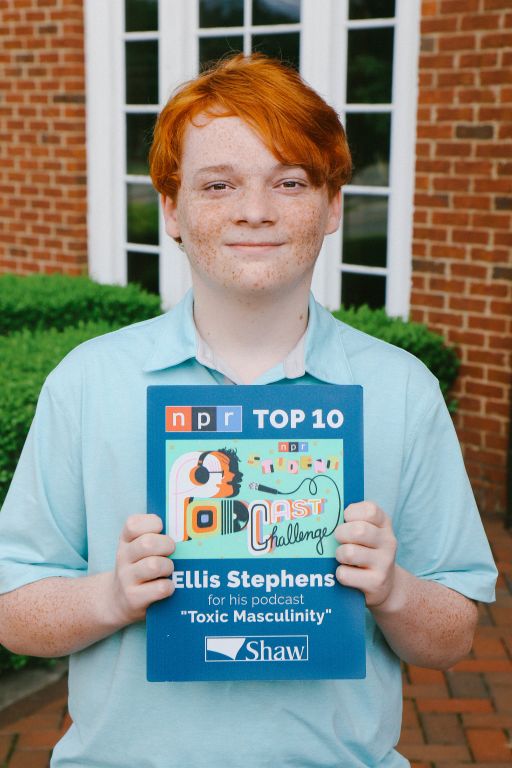 Ellis Stephens, a student at Dalton Middle School, recently created a podcast for the 2020 National Public Radio (NPR) Student Podcasting Challenge. Out of more than 2,000 podcast submissions, Stephens's podcast placed in the top ten of all finalists.

The NPR Student Podcasting Challenge is a competition open to students in 5ththrough 12thgrade across the country. Students can work alone or in teams to create a podcast submission between three and twelve minutes in length.

According to the NPR website, submissions are judged based on their information and structure, personality and creativity and their production quality.

Stephens decided to work alone tackling the topic of toxic masculinity. In the description of his podcast, he defines toxic masculinity as, "Oppressing stereotypes of what boys should be as they are growing into men."

As he explored these topics, Stephens wanted to interview different friends, classmates and teachers about what masculinity meant to them, and how they see toxic masculinity play out in their lives.

Stephens faced several challenges while creating this podcast. After he had almost completed the entire podcast, he accidentally switched his iPad with another student's and all of his work was erased. He said initially he was devastated, but it turned out to be a blessing in disguise.

"In a way though it was actually good that the entire thing was deleted," Stephens said. "Right at the moment it was deleted, we got a new program on our computers, and once we started using that it was really a breeze."

When schools closed due to COVID-19, NPR extended the deadline for podcast submissions, which allowed Stephens the time he needed to recreate his podcast from scratch.

Amanda Triplett, journalism teacher at Dalton Middle School, said her only goal for this year was just to have students submit entries to the competition. She hoped they might win a few honorable mentions, but she never imagined a student placing in the top ten.

"It's hard to know where we'll go from here, because really our only goal this year was just to enter," Triplett said. "When I got the email that it placed in the top ten, I just about came unglued, honestly."

Triplett said the entire group of students, Stephens included, were extremely flexible. Because it was her first year teaching podcasting, she felt like she was learning alongside her students.

"I basically just said in the beginning, I've never done this before we're learning this together," Triplett said. "It gave the kids the opportunity to help teach each other and learn as a group."

Through this experience, Stephens learned that creating a podcast takes more than just turning on a microphone and talking.

"It can be very overwhelming," Stephens said. "There's a lot of planning that goes into it, there's different interviews, and you have to edit a lot out. You have to just move along and be prepared to make cuts if something doesn't sound good."

For Stephens, podcasting is a great way for students to get their voice and their point of view out into the world, especially for students who may not be comfortable with public speaking or appearing on camera.

"It's very hard to step in front of the video camera and start talking," Stephens said. "So just recording yourself, it was a confidence boost for me, and it really helped me. And I'm sure that if we keep going with podcasting, it will really help people."