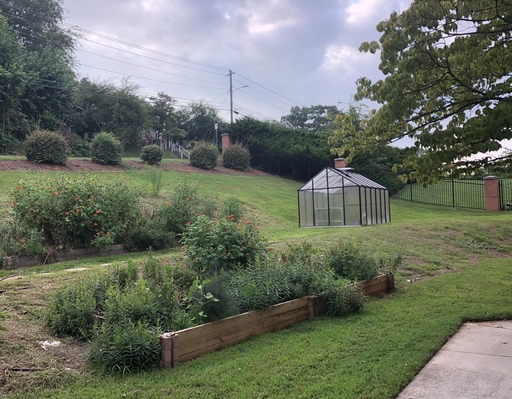 Dalton High School senior Jake Dean knew he wanted to give back to his elementary school alma mater when deciding on a project for his Eagle Scout Award. The idea to fix up the gardens and greenhouse at Westwood Elementary was the perfect combination of filling a need in the community and allowing him to thank a place close to his heart.

Dean's mother LeLe teaches at Westwood and was able to give him a feel for what kinds of needs the school had. She told him that the garden could use some repairs and that it was not being used to its potential.

So, Dean repaired boards at the top garden and the green house, created a path to avoid the often muddy terrain, added a picnic table, and even built a second butterfly garden on the lower terrace.

Dean said it was important to give back to Westwood because he really enjoyed his time there and many of his favorite teachers impacted him in his elementary school days.

"It was nice to give them something they can use in their classroom," he said. "I hope the students get to see a lot more with the caterpillars, like actually get to see their entire life cycle. And, I hope the fourth and fifth graders get to see how growing vegetables works and how to care of plants in the greenhouse."

The second garden has much more space than the original to allow for more plants, which Dean hopes will lead to greater use by the students. Dean said he noticed that a lot of caterpillars had made their way into the garden after the butterfly plants were added, like milkweed and Mexican sunflowers.

The project took two to three weeks to complete and many volunteers had a hand in getting it done. Dean wanted to thank his entire scout troop for helping and especially his scout leaders, John Barnes, Andy Carlson and Kevin Wright, who were a huge help throughout the whole process.

"They have helped me from when I was seven, starting scouts in the first grade, and all the way up to now," explained Dean. "The current cub scout troop at Westwood was also a huge help. Most of them were in my mom's first grade class, and they got to come out and help after school. They were super excited to do that."

The project also received donations from Lowe's, which supplied path stones and the picnic table, and Shepard's Mulch, which supplied most of the dirt and gravel for the greenhouse.

Dean said the project taught him leadership, organization and time management skills. "It's a lot to keep up with, so it's nice to be able to experience that earlier rather than later," he said.

"I'm glad I got to help out the school I went to and also my mom. It was a great experience for me to be able to help and make that school a little bit better."