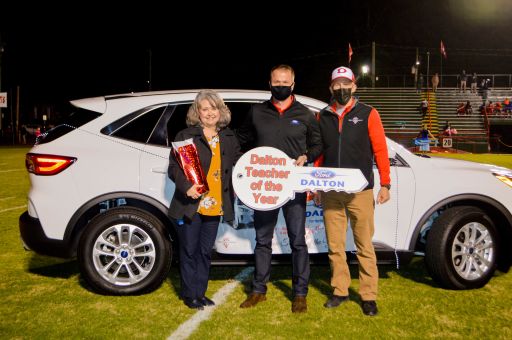 “This is a testament to the fact that teachers investing in the new girl who smells like cigarette smoke and doesn’t talk, can have lasting results.” 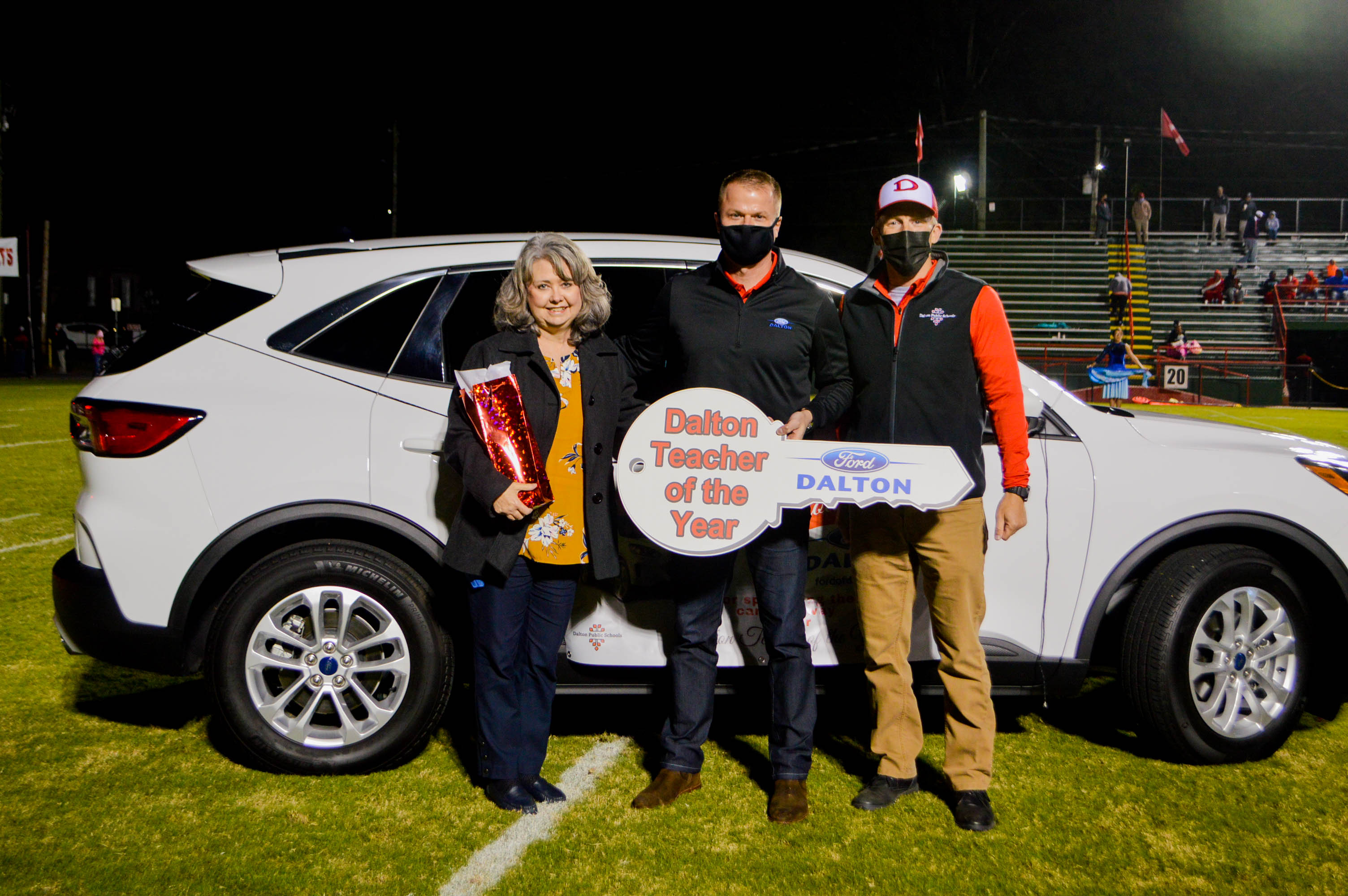 Teresa Hensley, literacy instructional coach at Park Creek School, always felt called to be a teacher. From early childhood, Hensley knew she would grow up to be a teacher one day.

"I do feel called," Hensley said. "I cannot remember notknowing I would teach."

Hensley was named Dalton Public Schools' Teacher of the Year at halftime of the Dalton High School football game on October 16 at Harmon Field. Jamison Thomason, teacher at City Park, was announced as the runner-up.

Shortly after receiving the award, Jason Denson with Ford of Dalton approached Hensley with a giant key and the actual car keys to the year-long lease of a brand-new Ford Escape.

Hensley had a difficult childhood which ultimately caused her to be selectively mute until the age of seven. She didn't speak until elementary school, and even then, she spoke very little. However, inside the walls of her make-believe classroom at home, she felt safe.

"In a house trailer bedroom with doll and animal students seated neatly in rows and the paneled walls as my chalkboard, I came alive in the safety of this classroom," Hensley said.

Her love for teaching was only fueled by the positive experiences she had with her own teachers over the years. Although Hensley didn't learn to read until third or fourth grade, she had a longing for learning that was nurtured by teachers she encountered along the way.

"My mother was illiterate, there were no books in my home," Hensley said. "Teachers invested in me, all along the way. To me, they soon became hailed in highest regard. I loved the way they looked, the way they smelled, the knowledge they imparted. I wanted to be one of them." 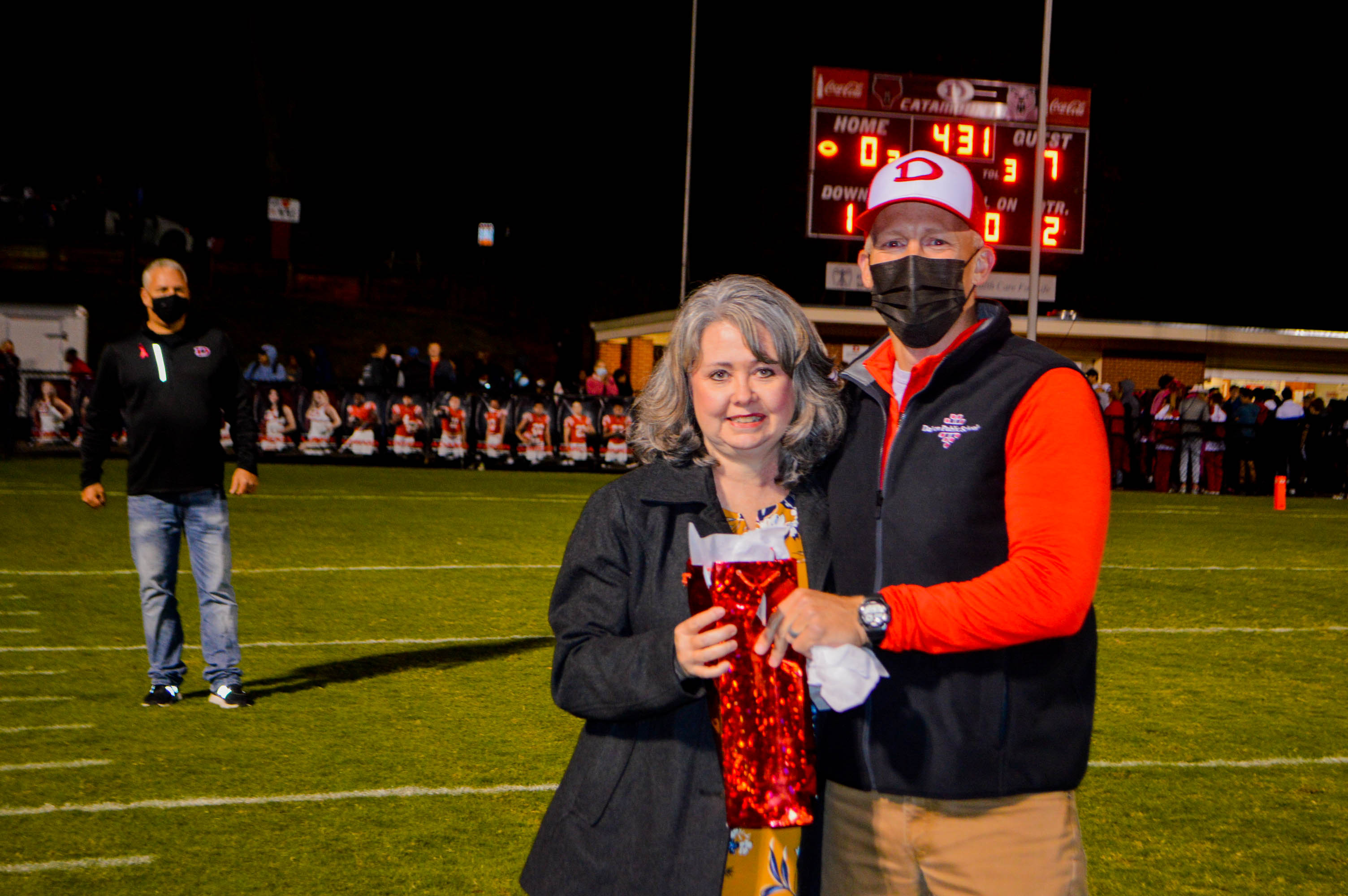 It was Hensley's own challenges in childhood that continue to inspire to help students who, like her, may have difficult childhoods or difficulties learning. In her current position as an instructional coach, Hensley works to help students and teachers which she finds incredibly fulfilling.

"Encouraging teachers has been as fulfilling as encouraging students," Hensley said. "Together, with the teachers, I feel I can exponentially touch more students, students I may never even meet."

Hensley knows firsthand that education, and specifically literacy, can be an equalizer for a student's life.

"I do not believe it is my job to ensure every student becomes a surgeon or even that each one attends college," Hensley said. "Those are their decisions, their choices to make. My desire is only that whatever they choose, their life will be richer because I have opened up a world of learning to them."

Hensley's life has been enriched by education, taking her farther than she ever dreamed when she was a child. In 2017, she authored and published her own children's book, Pretty Birds. She often shares her book with students when appropriate, so she can share with them just how much power literacy has to enrich their lives. 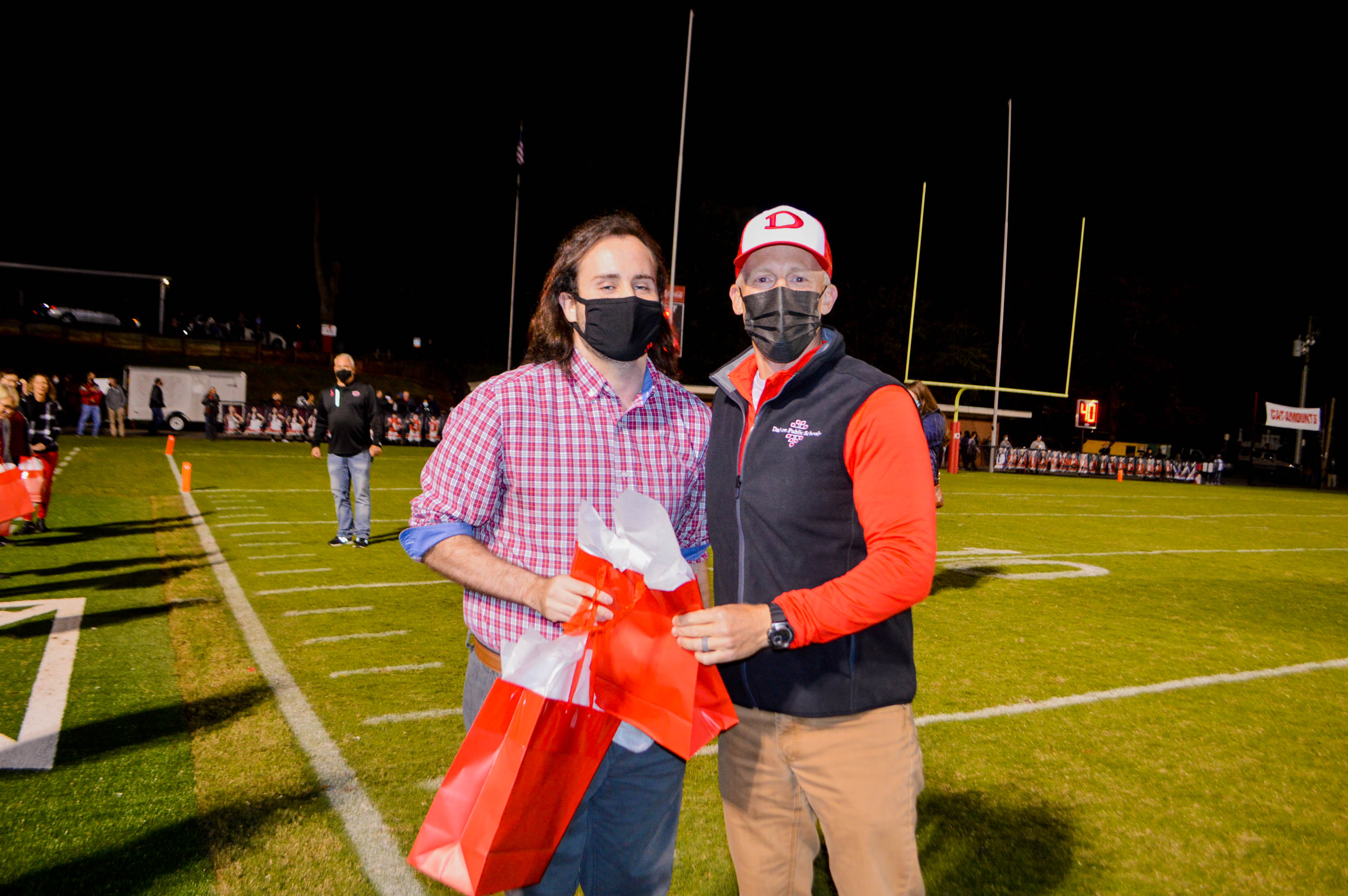 "Each time I sit down with a student who struggles, much like I did, my first goal is to briefly tell them my story and secondly to fill them with hope for their own future," Hensley said. "This is a testament to the fact that teachers investing in the new girl who smells like cigarette smoke and doesn't talk, can have lasting results."

Hensley also received a check for $500 as the district Teacher of the Year and a check for $150 for her honor as the school teacher of the year. The financial awards were made possible through donations from partnering businesses Caroll Daniel Construction, J W Buckley and Associates, Shaw Industries and Georgia Federal Credit Union. She also received a Dalton Difference coin.

Each of the school Teacher of the Year winners received a $150 check and a Dalton Difference coin to keep.