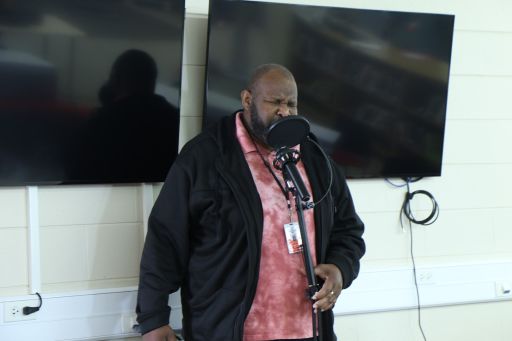 “Through this experience, I ultimately want to showcase some of the hidden talents Morris has to offer." 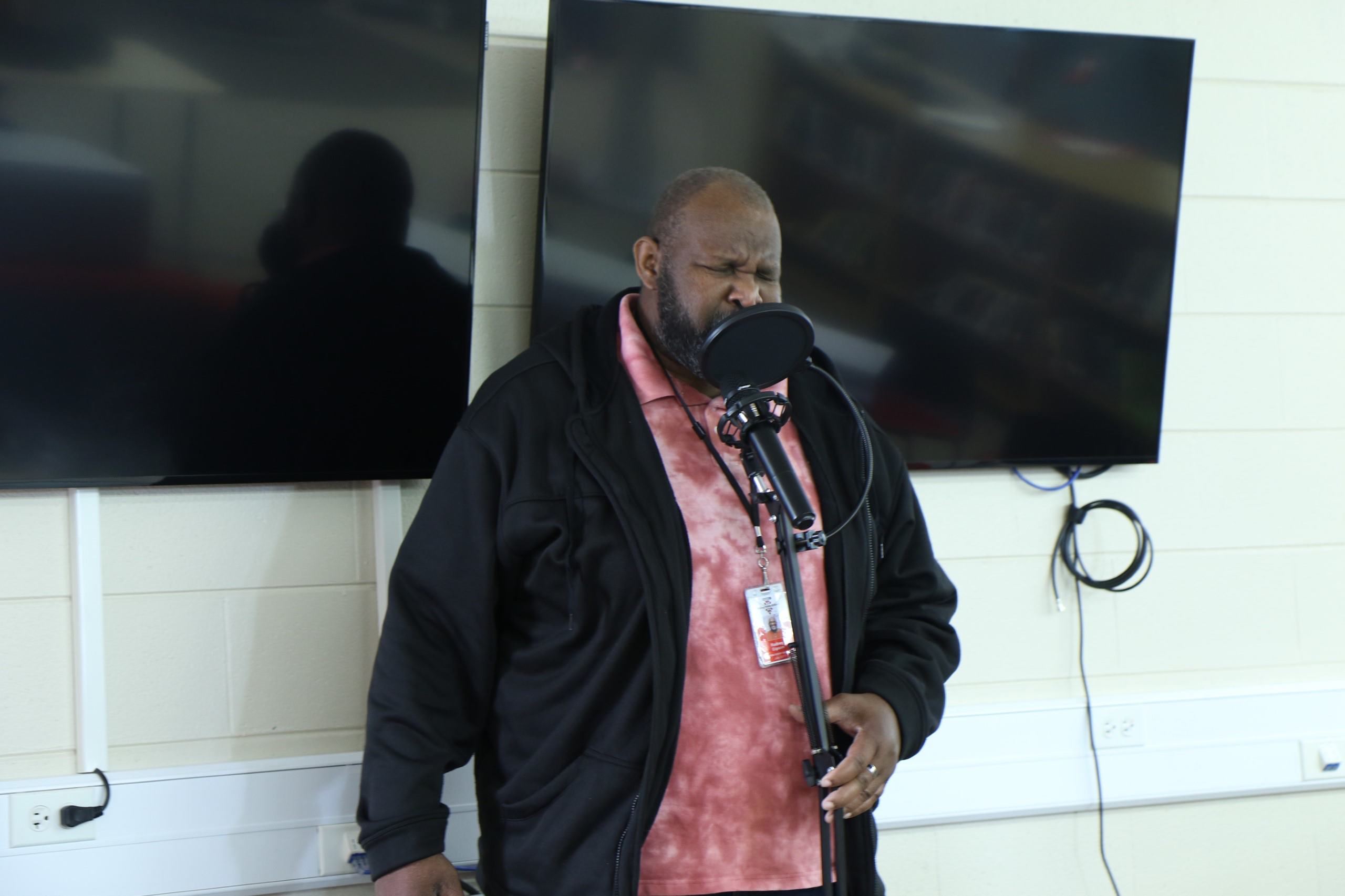 When Rodney Gipson, music director at Morris Innovative High School, was pondering how to best access his new intermediate music technology class last fall, he came across a video that sparked an interesting idea. It was a video on YouTube of widely known singer, Snoh Aalegra, performing one of her songs in a library with her band members bunched up in the background. Aalegra was performing in what is known as a "Tiny Desk Concert."

A Tiny Desk Concert is an intimate setup that is located in much smaller venues like a back corner of a library or a closet. These smaller-scale performances introduce to its viewers a more secluded and personal approach to an artist's music as compared to a normal, raucous concert with thousands of people in attendance. The Tiny Desk Concert series, established by NPR Music in 2008, now has over several billion views worldwide.

Gipson's idea of recreating this intimate Tiny Desk Concert setup in the library of Morris Innovative quickly came to fruition as he and his students prepared for Morris' own concert series to commence.

"I believe there is always a level of fear or apprehension when trying something new or different," said Gipson.

The conclusion of this year wraps up Morris' first full year of offering the intermediate music technology class. The hands-on, practical approach to learning and creative instruction has rapidly increased the students' growth and confidence in the field. 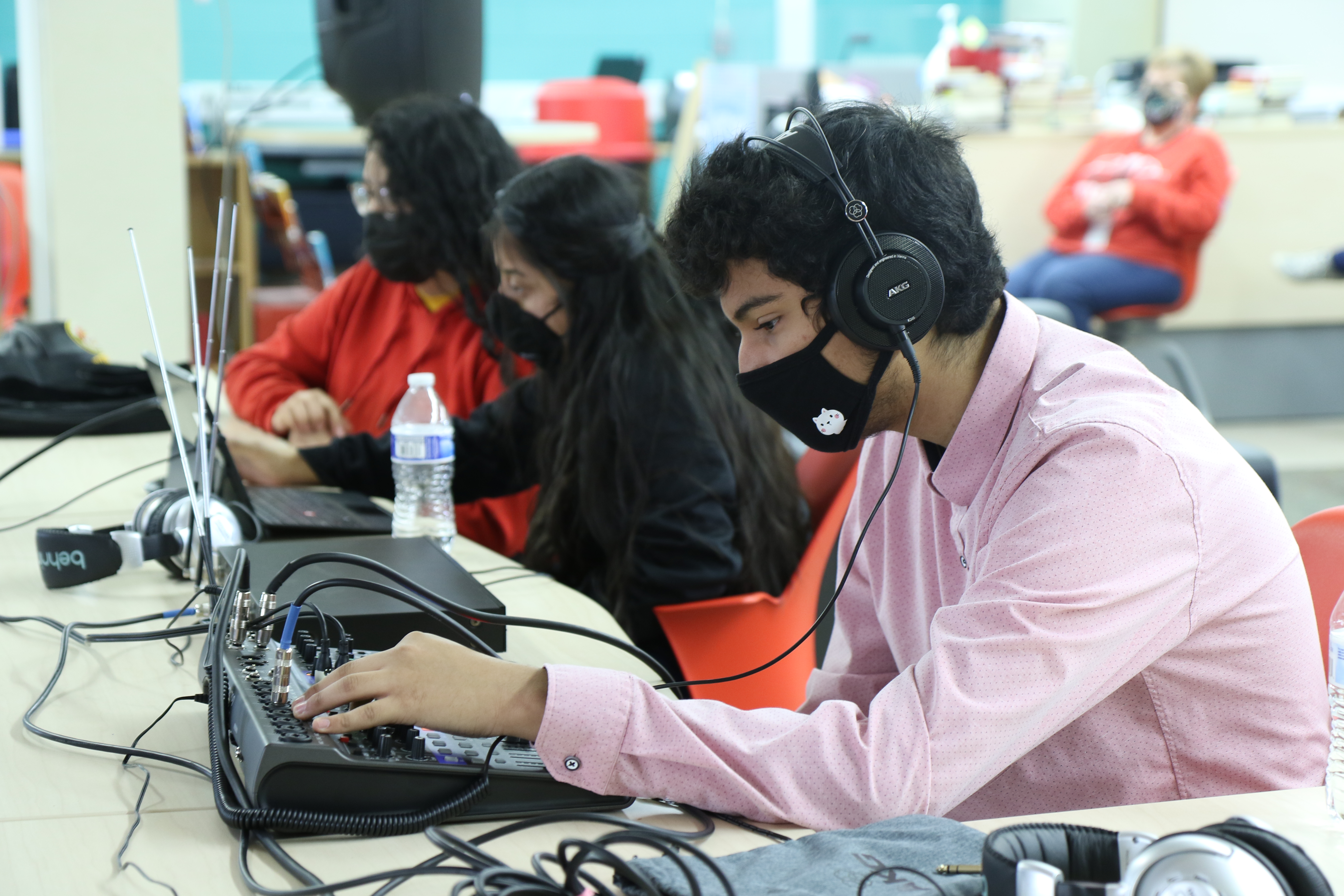 "In the beginning, my producers lacked the skill and confidence to host a performance like this," said Gipson. "However, once they discovered that they can do what was asked and required to have a great performance, I immediately noticed a growth in that confidence."

Gipson was the initial performer in the concert series as he planned on testing all of the equipment that was strategically set in place. As Gipson took center stage and was readying himself for this performance in the middle of the library, several of his music tech students sat behind a longer table while monitoring both the audio and the recording side of the operation.

To go along with the class's initial Tiny Desk Concert, there was a smaller audience in attendance. Gipson and his students had set up two rows of seats in the back of the library for the two homeroom classes they invited to attend. The music tech class only invited two homerooms to their concert as it is meant to be a smaller, more personal environment.

"Through this experience, I ultimately want to showcase some of the hidden talents Morris has to offer," said Gispon.

Last year, Gipson and his class were planning on doing a "Masked Singer" event at the school, based on the hit television show "The Masked Singer" on ABC. There were teachers from Morris on board with getting involved and participating in the event. Sadly, the event could not take place after COVID-19 sent the district home to virtually learn during the remainder of the semester.

Gipson and his students prepare and proceed diligently as even more Tiny Desk Concerts take place in a smaller room with books lining the walls. Along with Gipson, five of his students are set to perform in the unique concert series. These performances range from singers, guitar players, and even an accordion player.

"Some of my students will go on to pursue a career in recording engineering," said Gipson. "For the students that don't, I want them to grow in self-confidence and apply that "can do" attitude in whatever dream they go after."